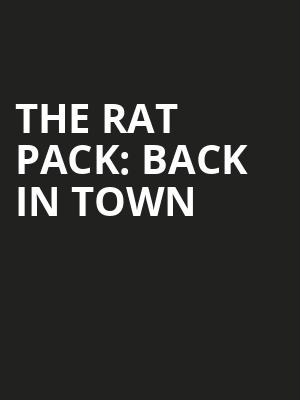 The Rat Pack: Back In Town

Relive the Rat Pack days when they come back to town!

Why See The Rat Pack: Back In Town?

Relive Dean Martin, Sammy David Jr. and Frank Sinatra's music and style in this world-class tribute show! With hilarious comedy and classic songs, you'll be transported back in time with timeless hits including 'Mr. Bojangles', 'That's Amore', 'Fly Me To The Moon', 'Luck be a Lady' and many more. This iconic production will not only show witness to the talent of the Rat Pack, but also their unique brotherhood which was shared onstage.

In 1960, the Rat Pack formed and began their journey by taking Las Vegas casino venues by storm. According to one version, the group found their name after Humphrey Bogart's wife saw him leaving a venue with friends and said 'You look like a goddamn rat pack'. Not only did the group have an unimaginable following, but they also had 'Rat Pack Mascots' which included Angie Dickinson, Shirley MacLaine and the sensational Marilyn Monroe.

Sound good to you? Share this page on social media and let your friends know about The Rat Pack: Back In Town at Sound Waves at Hard Rock Hotel and Casino.