Sorry! You missed The Coasters, Drifters, and Platters at Sound Waves at Hard Rock Hotel and Casino

Unfortunately, we don't have any information about upcoming performances of this show. Maybe we can interest you with something similar from the options below... 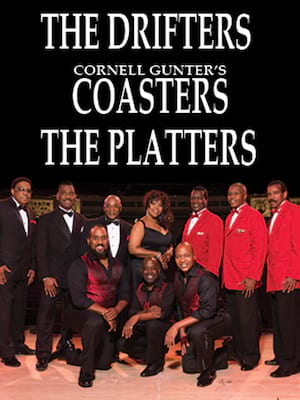 The Coasters, Drifters, and Platters

Fast forward to present day and the rebooted version of The Drifters are still bringing the soulful, rock 'n' roll songs we all know and love

Why See The Coasters, Drifters, and Platters?

Get ready for a nostalgic trip down memory lane! Doo-wop legends The Drifters, rhythm and blues icons Cornell Gunter's Coasters and celebrated vocal outfit The Platters are joining forces for a whirlwind tour. Instrumental in the creation of the Rock & Roll/Doo-wop sound, the three groups are dusting off their considerable back catalogue of hits - keep your ears peeled for updated versions of classics like Under The Boardwalk, Charlie Brown, and The Great Pretender.

Formed in their home town of New York City in 1952, The Drifters enjoyed three golden eras in the 50s, 60s and early 70s. Under their prestigious moniker, the outfit made Motown magic  and reinvented themselves thanks to an ever evolving roster of musicians. As such they were inducted into the Rock and Roll Hall of Fame twice, once in 1998 as The Original Drifters and once in 2000 as Ben E. King and the Drifters.

Seen The Coasters, Drifters, and Platters? Loved it? Hated it?

Sound good to you? Share this page on social media and let your friends know about The Coasters, Drifters, and Platters at Sound Waves at Hard Rock Hotel and Casino.